Now, the trend may shift even more of the undocumented burden onto developers. The YouTube API recently moved their official developers support from Google Groups to Stack Overflow (Move)— relying on a few thousand questions about the API and on mechanisms of Stack Overflow. And there is no sign in sight that documentation is all the sudden going to get better.

Instead, developers have been indirectly documenting APIs themselves through a process called crowd documentation, by publishing blog posts and curating questions and answers about APIs. We previously found that even without any inherent coordination, a crowd of Android developers can cover as much as 88% of the API classes in discussions on Stack Overflow.

We collected 1,316 days of Android developer history (average 11 weeks per developer) and we found 9,234 visits to stackoverflow, as well as 2,547 to developer.android.com, which hosts the official documentation for Android. We also analyzed the code examples that could be found in the Stack Overflow data dump and developer.android.com/guide.

In our new study, we find that:

We also found some interesting patterns of web browsing behavior:

Where do developers go?

We looked at developers (A-Q) and analyzed how often they visited an Android Stack Overflow question and official Android documentation.

A comparison of visits to Stack Overflow questions tagged “android” vs visits to official android documentation. 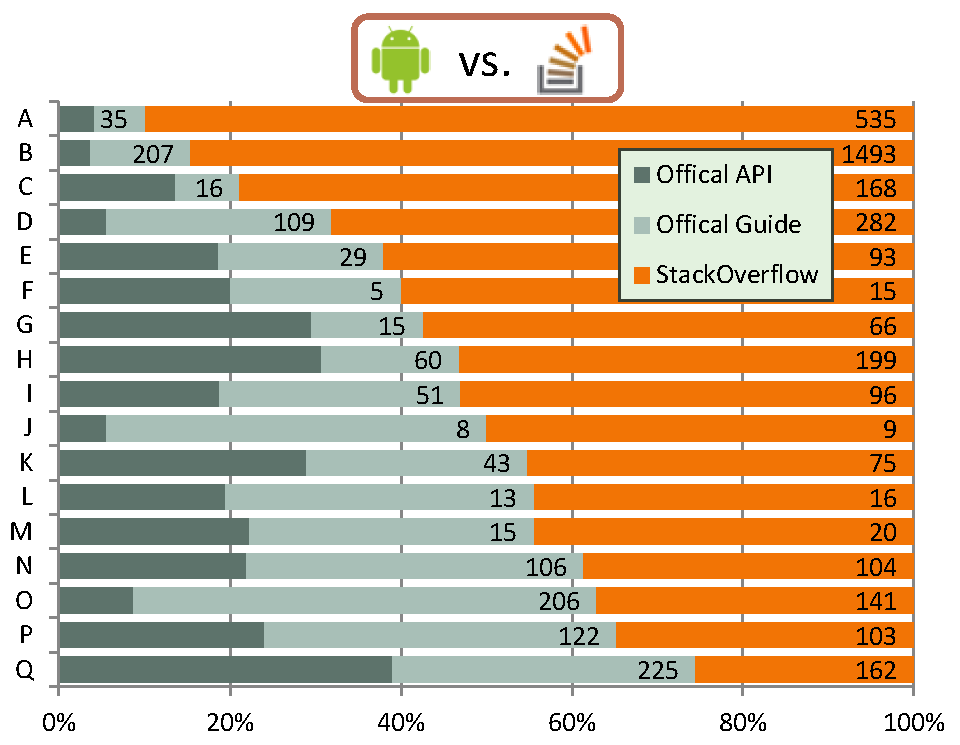 A day in the life of three different developers (A,E,Q) and a visualization of their of web visits: 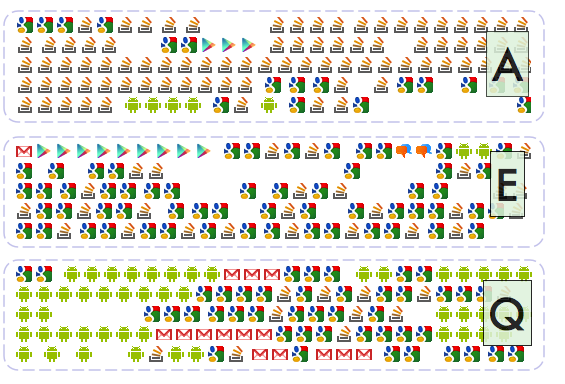 Some quotes from developers we surveyed about Android official documentation:

C: Keeping it updated and relevant to all versions of Android. Additionally, a lot of times the examples are for use cases that are irrelevant to what I need it for (either too complicated or not detailed enough - it’s a fine line!).
D: The biggest thing lacking from official documentation is edge case and error documentation.
J: The official docs don’t have enough examples!

The official Android documentation guide only had explanations (measured by API class references in a paragraph of text) for 36% of its API classes, compared to Stack Overflow’s 88%.

Initially, I used to search in developer.android.com. But in my opinion, for a novice who starts android by going through the developer documentation, will be a tough job. So what I did was, going through the posts written by the top reputed Stack Overflow members. This is the easiest way to learn android. Once you have the basic knowledge on android, dev-docs are more useful for me to understand.

Interestingly, that is the same philosophy supported by the recent Stack-ed site:

The most reputable StackOverflow contributors and their accepted answers to questions.

You only studied 17 developers. What can you really conclude?

We had to pay spend $1000 in amazon gift certificates to do this research. If you have doubts, the best way to help is by donating your history! In return, you get a cool browser extension, DocSight, to revisit and visualize your own developer documentation history!

Please email [email protected] if you would like to see a more detailed research report or please comment below for any questions.